During his stay in Paris Hudon met many influential personalities including Picasso and Léger. His work has been exhibited regularly since 1947 at the Salon du Printemps of the Montreal Museum of Fine Arts and in other galleries in Quebec, Canada and abroad.

Also recognized as a cartoonist, Hudon’s caustic drawings have appeared over the years in Montreal newspapers such as La Presse and Le Devoir. Hudon’s irreverent eye has consistently influenced his paintings, which typically depict familiar Montreal neighborhoods and figures.

At the end of the 1970s, Hudon finally focused his work entirely on oil painting. Thanks to his collaboration with Le Balcon d’art and its partners, Hudon’s work has become an essential part of the heritage of Quebec figurative art.

He left a massive body of work present in most major collections, and his popularity and market strength did not improve until nearly two decades after his death.

Own artwork from Normand Hudon? 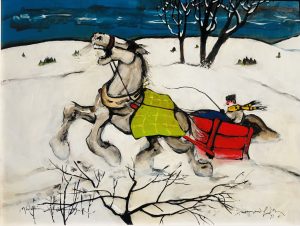