Arthur Villeneuve, born January 4, 1910 in Chicoutimi (Quebec) and died May 24, 1990 in Montreal (Quebec), is a Quebec painter. He is known for the naïve paintings with which he decorated his house and for his investiture into the Order of Canada.
Villeneuve was raised in a working class family in Chicoutimi. His father was a mason, bricklayer, and church choir member. Among his brothers there was a shoesmith turned blacksmith, a locomotive engineer, and an upholsterer. After leaving school at the age of fourteen, Villeneuve was hired in a paper mill. When he was sixteen he took a winter job as a “chore-boy” in a camp, work which did not hold his interest for long. Finally, in the same year, Villeneuve settled on a career when he became a barber’s apprentice. By nineteen years of age Villeneuve had already purchased his first barber shop, the Salon Champlain on rue Sainte-Anne in Chicoutimi. Within three years his business was flourishing and he was secure enough financially to buy two rental properties. He soon sold these in order to buy a restaurant, but all the while maintaining control of, and working long hours at, his salon. These years of prosperity ended abruptly in 1944 with the death of Villeneuve’s first wife, Simone Bouchard, and the loss of his properties. He became a barber at Hôtel-Dieu Hospital in Chicoutimi. Meanwhile, he remarried: his second and last wife was a woman from Rimouski named Hélène Morin. In total Villeneuve had seven children, four with Simone and three with Hélène. The nine Villeneuves lived in their modest sized house at 669 rue Taché, Chicoutimi, beginning in 1950. The House of Arthur Villeneuve Early in his second marriage Arthur began experimenting with drawing, collages, and sheet metal sculptures. Among these last there remains an elaborate clock, a ship and a lighthouse, each of which images would become prominent themes in his later platte peinture. But his most famous early work is the house he bought at 669 rue Taché which he nearly completely covered, inside and out, with his first paintings.[1] This sudden urgency on Arthur’s behalf to become an artist was attributed by him to a revelation he had in 1946. This decisive moment occurred during the homily at Sunday mass, in which the priest quoted from a letter of Pope Pius XII. The purpose of the letter was to exhort the faithful to make full use of their talents.[2] Arthur believed that he had, until then, left his artistic ability untouched, and returned home to set about developing his gift. Arthur began painting frescoes on the outside of his house in April, 1957. Still working as a barber, he painted 100 hours per week for 23 months, until he had covered the front facade, the rear, all the interior walls and ceilings, and even the windows of his house.[3] Because he was entirely self-taught and completely out of contact with his contemporaries in the painting world, Arthur was and is classed among those who practiced naive art or primitive art.

Curious by nature and gifted with a good sense of observation, he made provision of perspectives, topics and images as sources of inspiration. He took many liberties in the representation of natural and urban landscapes, but he also mixed ages. He painted what he felt, first and foremost.

Own artwork from Arthur Villeneuve? 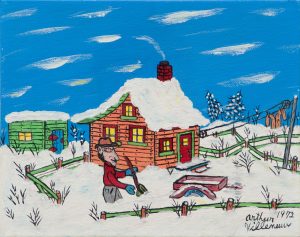